At 8 a.m. on Jan. 1, marijuana dispensaries opened up to the public in Colorado for all citizens. Colorado residents 21 and older can buy up to one ounce of weed at a time, and non-residents can purchase up to a quarter of an ounce at a time.

For Kansas, this means nothing. All marijuana is illegal in Kansas, and possession of any amount can land offenders in jail for a year with an additional $1000 fine. The only way Colorado’s law is affecting Kansas is that more marijuana is traveling across the border.

Twenty states and Washington D.C. have legalized medical marijuana so far. Kansas is not one of those states. People suffering from depression, anxiety, cancer, AIDS, alcoholism, muscular dystrophy, diabetes, and many other ailments qualify for a medical marijuana prescription. It is used to stimulate appetites, alleviate pain, and calm nerves. The use of marijuana for medicinal purposes is controversial because it’s not considered necessary. Dr. Wakon Fowler of Pratt Regional Medical Center said he would not prescribe marijuana if medical use were legal.

“I have other alternatives,” Fowler said. “We have plenty of other medicines that we already use for pain, anxiety, and appetite. We don’t need medical marijuana.”

Many other states have organizations pushing for the same rights, including Kansas.

“Fire It Up Kansas” is an organization for the legalization of marijuana not only in Kansas, but all over the world. Their slogan reads “Firing up the cause in the land of Oz,” and their website gives arguments about the benefits of the miracle plant.

Many Kansans doubt the safety of marijuana and believe that the legalization would not be beneficial to our state or country.

“The problem in my opinion is that it is a threshold drug,” Fowler said. “It bridges kids into using increasingly harder drugs.”

Many states, however, are loosening their laws on the plant. Whether it is medical or recreational use, there are people pushing for it. Senate Bill 9 is a bill that hopes to enact medical marijuana use in Kansas, and it has been presented to Kansas legislation for consideration multiple times only to be shot down. Proponent’s hopes are high for 2014, but there is a lot of doubt surrounding the idea. 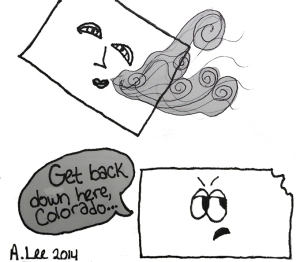 “‘Medical marijuana’ appears to be a strategy to lend credibility to smoking pot and desensitize people to a total end to the prohibition,” Republican Kansas state senator Mitch Holmes told the Pratt Tribune.

Democratic Kansas senator David Haley said in an interview with KAKE that he plans to present SB 9, or the “Cannabis Compassion and Care Act” this year. The bill calls for the “legal use of cannabis for certain debilitating medical conditions.”